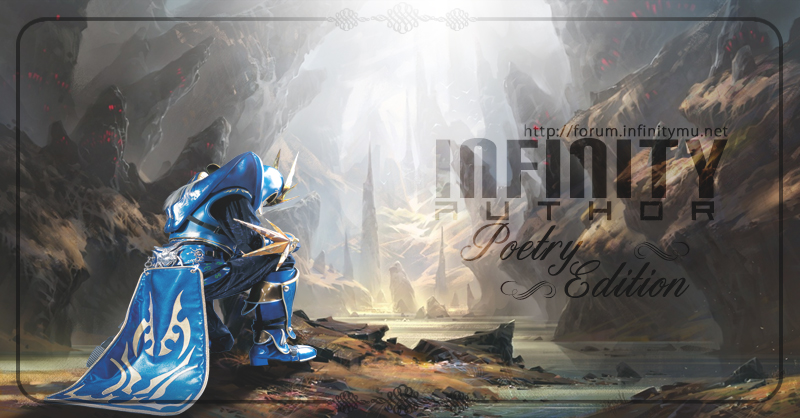 Welcome to our InfinityMU Author Event, October Edition.
This month we will choose a topic and you will create a POEM based on that topic, and post it here.
The POEM must only be regarding the topic that we will provide. Prepare your poetry skill and become our
InfinityMU Author


Topic: Man vs machine
Is your character a man or a machine?
Describe how is your InfinityMU character by adding details about your skills, weapon, shield, set.
Put this into max of 12 lines and share your experience with us.
Now it's your chance to show us your poetry talent!

1. Members with 10 posts and above can enter the event.
2. Each participant can join with only 1 POEM.
3. Do not copy a POEM from the internet.The staff members will keep track of the originality
and validity of each stories, if you break the rule your entry won't be accepted.
Please check rule no. 17 from the Forum Rules.
4. Stories with offensive language will not be accepted.
5. The story size should be a SHORT POEM - YOU HAVE TO WRITE A POEM
WITH A MINIMUM OF 8 LINES AND MAXIMUM OF 12 LINES
6. The story you submit must be created based on the topic we provided.
7. Normal font is required.
8. Entries submitted after the given deadline will not be accepted.
9. Write your In-game name(IGN) above the entry that you are going to post. If you don't provide a valid IGN your rewards will not be added.
10. All entries should be submitted IN THIS THREAD until the deadline. Late entries will not be accepted.


Criteria for judging the entries:

1st PLACE:
10,000 gold credits + 10 FIMES
+ your entry will possibly be added in the InfinityMU Wiki Page
+ the awesome Poetry Master Tag for 1 month.

Consolation Prize:
Entries that have at least 1 vote will get 500 Gold Credits + 1 FIMES

What are IMES/FIMES you ask? Read Here.

You can PM me in forum if you have any questions regarding the event.
Deadline for submitting entries: 18th of October
The poll will be made after the deadline.

October Edition closed. The winner has been announced: https://forum.infinitymu.net/threads/infinitymu-author-october-2020.123808/